We are excited about our line up of workshops that will take place just three months from today! We will have 5 workshops on 7th September 2017, that will keep you engaged and challenged all day, the hardest part is choosing which to attend. Will you challenge yourself by attending the CodeCon workshop presented by Bloomberg, or do you want to learn about the Greenfoot development environment which can be used in teaching? Accenture will present an exciting opportunity for your career goals, ACM delivers to you a Chapter in a Box and Women in HPC will present an introduction to HPC programming. Check out the abstracts on the website.

If you want to attend these workshops, there are three steps:

We are looking forward to seeing you in September.

BIG THANK YOU to the Supporters of Participation Scholarships for womENcourage 2017.

In addition to funding our Participation Scholarships, our supporters will be available at the Career Fair on September 7th from 1:30 PM until 4PM. Come join us for lunch at the Career Fair, network with industry professionals who can give you information about internships and career opportunities.

Additionally, our supporters are interested to see your CV as soon as possible, be sure to submit your name and CV to the CV database. We will forward this information to the supporters who will contact you prior to the event to discuss with you opportunities.

Here is the list of ACM-W Europe Women in Computing events for the coming months. A worldwide list can be found here.

Informatics for All, Mallorca, Spain May 5 2017 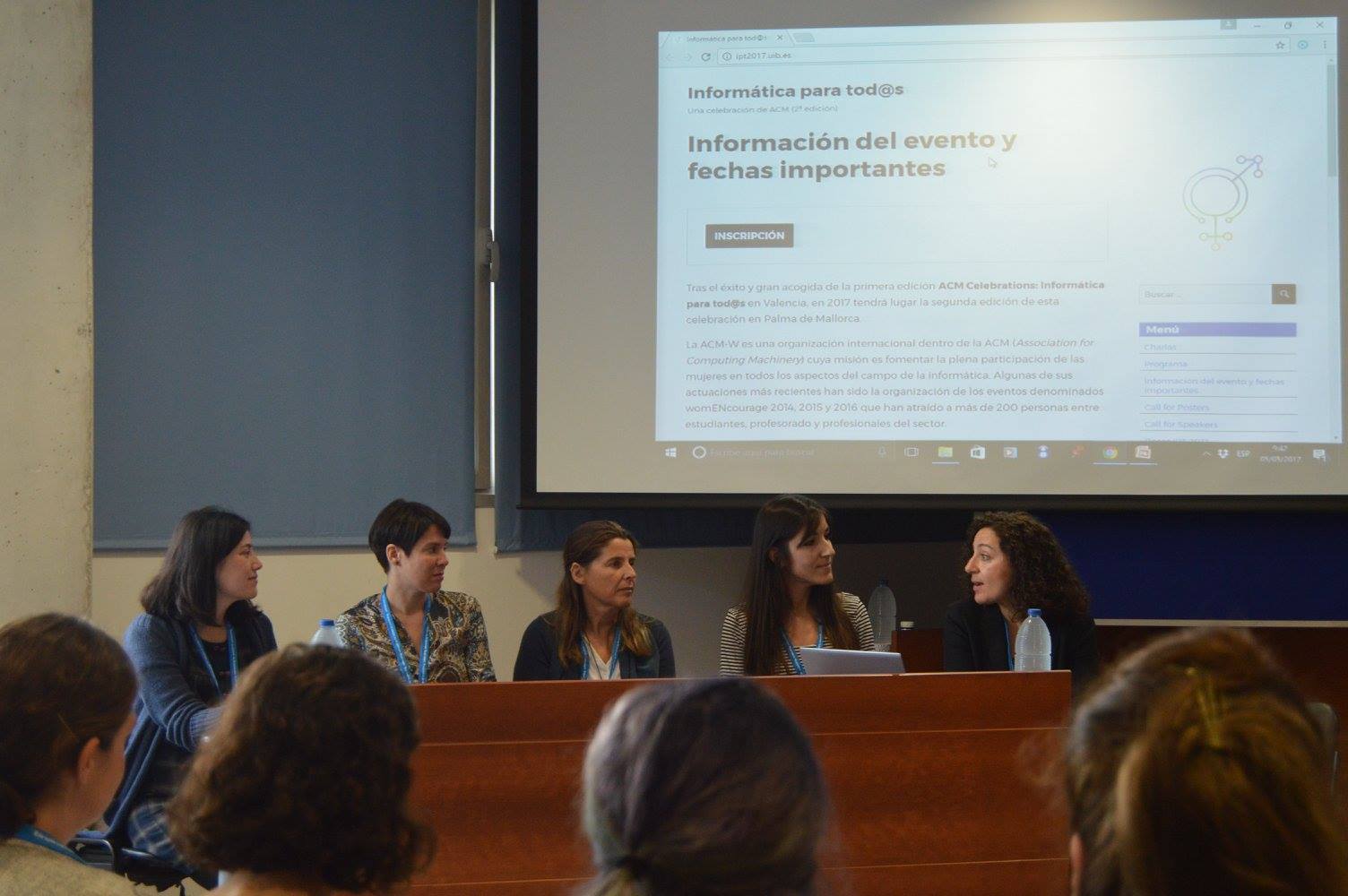 In less than a year since the first Spanish ACM Celebration of Women in Computing, we are very happy to announce that on 05 May 2017 we celebrated the second edition of this fantastic event, Informatics for All. It was held in Palma de Mallorca, at the Universitat de les Illes Balears. Not only the number of attendants increased since last year, but also the number of poster submissions and speaker proposals.

The event comprised four talks from female experts in different areas of expertise, a very interesting panel about the future of women in computing, and a poster session with 3 min presentations by all the poster authors followed by a coffee break in which the rest of the attendants could speak with the authors about their work.

Overall, it was a lovely day with very positive feelings, fruitful discussions, and plenty of time for networking and celebrating. The success of this event gives us even more energy to keep growing this community. We are already thinking about the next edition, and in the meanwhile, we are planning to create a female expert database to support future collaborations and interactions. For the next edition, we would love to increase the participation of men in this kind of events even more, and broaden the dissemination and include activities for young students in the event. 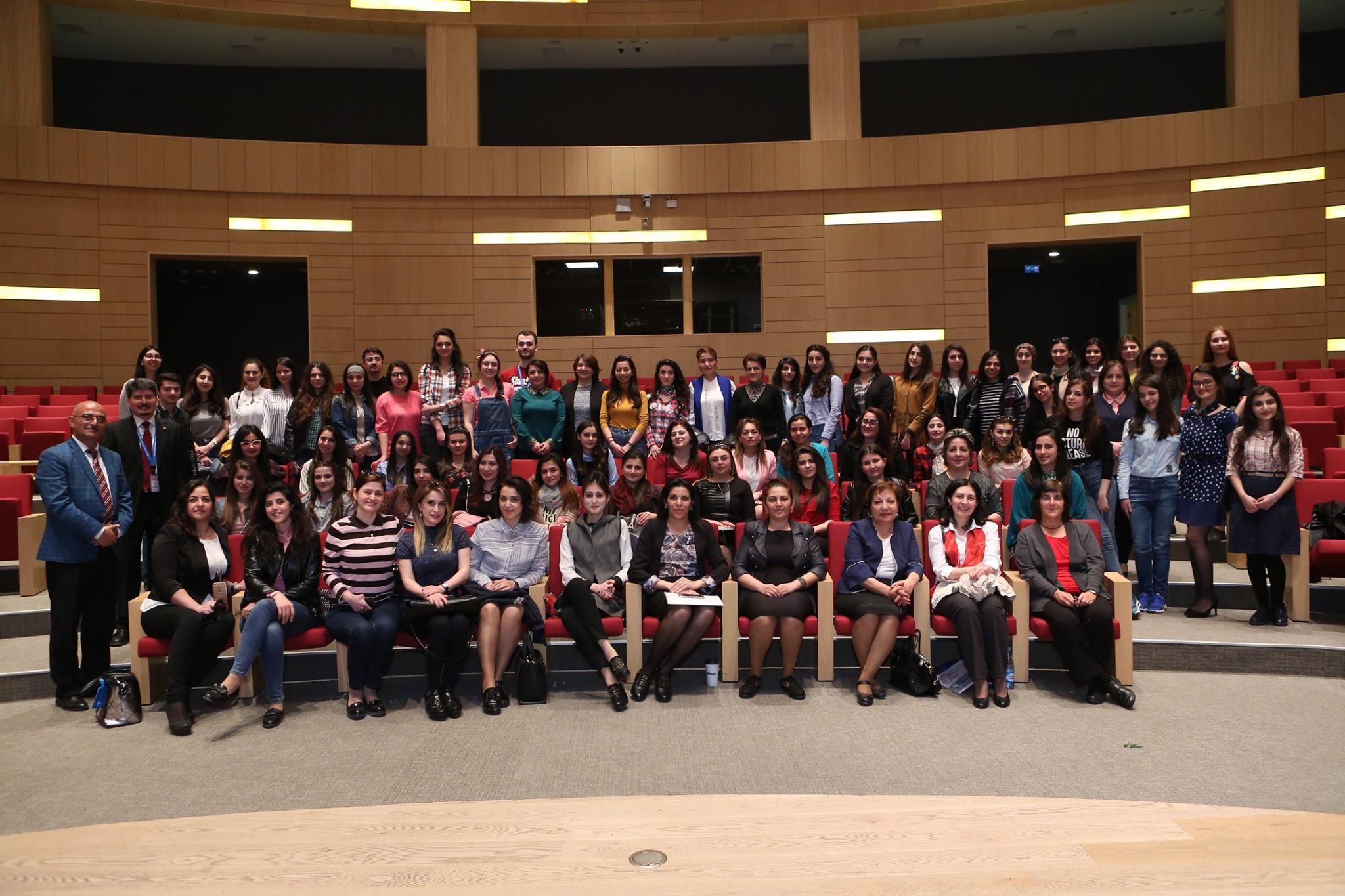 On 15 April, Azerbaijan ACM Chapter partnered with ADA University School of IT and Engineering again to organize the second of its now-annual celebration of women in computing named Ada’s Legacy. Despite the similarity to the university’s name, it is a pleasant nuance – the event is actually named after a 19th-century mathematician, Lady Ada Lovelace, who is considered as the first programmer in the history.

“Ada’s Legacy: Celebrating Women in Computing” brought together more than 100 students, researchers and professionals from academia and industry to celebrate women in computing, as well as to promote ACM Europe Celebration of Women in Computing: womENcourage 2017 conference.

The guest of honour of this year’s event was Prof. Jennifer Widom, Dean of Stanford University Engineering School. Prof. Widom stayed till 17 April for the Big Data Weekend, where she ran short-courses on big data, data analysis and visualization, and machine learning, as well as big data’s implications and significance in today’s fast-paced world.

After welcoming notes and appreciation of leading women in IT, who supported last year’s event, the audience watched a BBC documentary “Calculating Ada: The Countess of Computing”, courtesy of the Open University, UK, with Azerbaijani subtitles about the very woman the event was named after.

Following a short sandwich break, three ADA University students shared their experience at the two-day ACM womENcourage 2016 conference in Linz, Austria, and gave some tips about the scholarship opportunities to attend this year conference in Barcelona, Spain.

The most exciting and long-awaited final part of the event was the panel discussion with Prof. Jennifer Widom and three local women leaders in computing, who represented industry, academia and government sector.

The event was featured in major news program at the national TV and 74% of participants rated it as excellent in a post-event survey.

Nominations are due November 30, 2017 for the following ACM awards:

ACM Prize in Computing – (previously known as the ACM-Infosys Foundation Award): early to mid-career fundamental innovative contribution in computing that, through its depth, impact and broad implications, exemplifies the greatest achievements in the discipline.

Eugene L. Lawler Award for Humanitarian Contributions within Computer Science and Informatics – recognizes an individual or group who has made a significant contribution through the use of computing technology. The presentation of this award alternates with the ACM Policy Award

Outstanding Contribution to ACM Award – outstanding contributions to ACM, in both value and degree

Please refer to the ACM Awards website at https://awards.acm.org/award_nominations.cfm for: