This month we’ve had the privilege of Adriana Wilde writing her experience attending BCSWomen Lovelace Colloquium, which ran for the first time online due to the pandemic.  Adriana Wilde is pursuing a part-time PhD in Computer Science at the University of Southampton. Adriana is also part of the womENcourage steering and organizing committee. We thank her for this marvellous account of the event, and the inspiration for participating in online events such as the upcoming womENcourage. 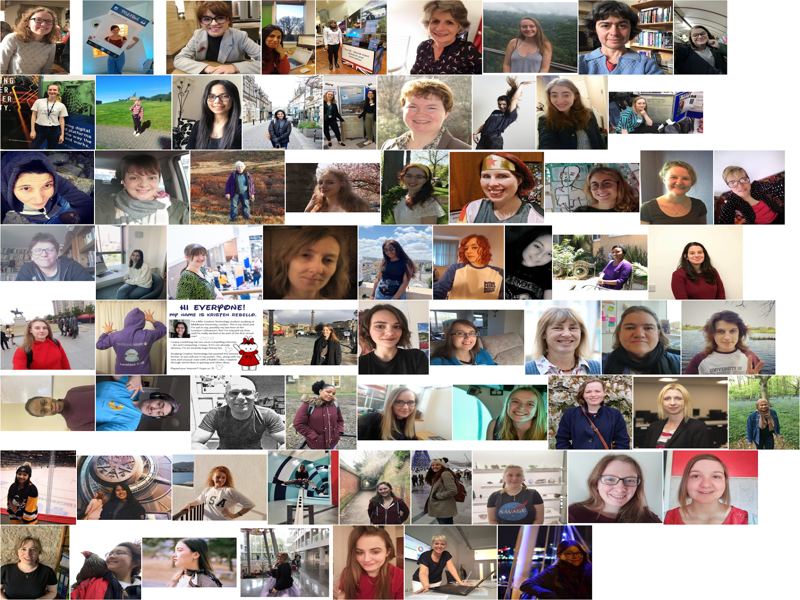 Attendees at the BCSWomen Lovelace Colloquium (borrowed from http://www.hannahdee.eu/blog/?p=1744). (I’m the fourth person shown in the collage from top-left to the right)

On the 8th April this year, I attended the 13th BCSWomen Lovelace Colloquium, an annual one day conference for women students of Computing and related subjects in the UK, supported by the British Computer Society (BCS). During the 13 years it has been run, it has moved around the four home countries of the United Kingdom, having been hosted in Leeds, Cardiff, Birmingham, Bath, Nottingham, Reading, Edinburgh, Sheffield, Aberystwyth and Manchester, very rarely repeating locations. This year, due to the pandemic, it was online for the first time and co-hosted by the Universities of Stirling and Glasgow.

My first awareness of BCSWomen Lovelace Colloquium was in April 2014, when it was hosted by the University of Reading. I went there with my little daughter as it was during a school holiday and I had no childcare — but also because the event welcomed children and I thought she would actually enjoy the day. It surprised me how much she enjoyed her swag and registration badge though!

I did have more academic reasons to come along. One of my undergraduate students was presenting a poster on a topic related to my PhD research, and I wanted to support her. Just a month before, I and five other women from my department, including her, had gone to the very first ACM-W womENcourage Celebration of Women in Computing, in Manchester, UK. I was keen to relive that positive experience in the BCSWomen Lovelace Colloquium.

Fast forward to six years later. Since that trip to Reading, there had been five more Lovelace Colloquiums, and as many more womENcourage celebrations. I had been able to see the growth of womENcourage over time as I have been involved in some way every single year, but I have not attended a Lovelace colloquium ever since. So I was wondering whether it had grown too and in which directions it had done so. From seeing the calls for participation I knew it had. But then something unexpected happened: a pandemic.

As Hannah Dee puts it on her blog:

The BCSWomen Lovelace Colloquium was supposed to be in Stirling this year. As ever, we’d put a lot into it (visits, campus tours, looking around poster spaces and theatres, booking rooms, choosing lunches, block booking hotels, etc. etc.) but as the event grew nearer and the pandemic grew stronger we had to decide: cancel, or move online.

Which is how we found ourselves organising the first virtual BCSWomen Lovelace Colloquium with just 4 weeks’ notice.

Despite all, I was pleased to see that much of what I liked six years ago was still there: it was a very nurturing environment, where we were encouraged to talk to each other and be inspired by interesting talks by excellent women from various paths and stages in their careers. Excellent in terms of their knowledge and experience, as well as for their human side, which none of them attempted to hide.

The organisers of the colloquium adapted it well to its new venue: instead of a small number of long keynotes, which work well in a hall packed with participants, they went for a larger number of short talks (~20 mins each), as this suited better the online setting. It was great that the talks were released in advance so that we could watch them earlier and at our own pace. So I was ready to ask questions and follow the comments during the Q&A sessions in the programme, to which we kept to bring us all together, as well as in other interactive elements of the event, such as panel discussion and posters session. Despite the talks having been pre-recorded (and made accessible in Canvas prior to the start of the day), the event as a whole was perceived very much as a collective experience.

The welcoming talk by Helen Miles from Aberystwyth really set the tone right for what the day was going to be like, as I could tell that they all were incredibly proud of the hard work that has gone into the colloquium (even with the caveat that some things may go wrong as “this is a bit of an experiment”). The speakers were a wonderful mix of women from all paths, academia, industry, and at different levels. Savi Majaraj, who lectures at the University of Stirling, talked about the very timely topic of modelling social distancing for controlling the epidemic spread. Jess Enright from the University of Glasgow talked to us about graph properties and how they can be applied to stop disease, and Ros Walker from the University of Stirling shared the challenges and opportunities of being a learning technologist during the pandemic. Lovisa Sundin, a PhD student from the University of Glasgow, talked about the concepts that make her fall in love with Computer Science all over again (and about books, which sparked a great discussion on reading recommendations!). Sharon Moore, from IBM, shared some “words of wisdom”, reflecting on her professional career and life decisions, much like Vicky Brock, a tech entrepreneur, had done too, about her very different trajectory. Vicky’s candour in sharing both her successes and the tests to her resilience was very moving for me. I have huge admiration for all the women out there trying their best, and who are able to share the vulnerability of not always getting it right, but succeeding in the long run nonetheless! It’s always inspiring meeting people like that.

The main thing the speakers had in common, amongst all of this diversity in career choice and level, was their passion for the discipline, and that desire to help out and encourage others to find their path within it.

Originally I was intrigued as to how it would work in a virtual event, as having attended (or helped organise) many career fairs in face-to-face events, I knew some elements of the experience would be near impossible to replicate, for example, the buzz of going into a hall packed with attendees navigating their way round tables with sponsors luring participants in with bright posters, lots of SWAG and even sweets. The prospect of not having a personal interaction felt weird. However, on the day, there were plenty of personal interactions. All sponsors were able to chat with participants through separate Discord channels. One sponsor that exploited particularly well the affordances of being in an online space was GitHub Education. Prior to the start of the colloquium, they had organised a competition for the best Octocat, so participants produced creative images of the well-known mascot and tagged them #MyOctocat. There was so much engagement and lots of colourful images were posted by attendees (sketches, colouring in, and also digitally-produced ones). GitHub education also gave away swag in the form of GitHub Student Developer packs. I got myself one too!

Unsurprisingly by now, the poster session went smoothly too. The use of Discord allowed participants to dip in and out the various channels dedicated to as many as 45 posters, where each presenter was at the ready waiting during their allocated time. For each poster, there was a chat and a voice channel, and before you went in, you could see who was in there. Sometimes I deliberately joined channels where I saw a presenter on her own, other times I joined on-going discussions, very much as I would have done in a face-to-face event. At one point I found myself chatting with a judge because the poster presenter was not yet in her channel, so the serendipity of bumping into people at conferences was very much part of it still.

With regards to quality, they were all very good in each category, covering a wide range of aspects of our discipline, and there were from all levels from 1st year UG to MSc. Each of the posters was visited by at least two judges and I imagine it would have been tough for them to pick the winners. In the end, the recognition went to Melanie Cope, Francesca Mirandola, Amy Pajak, Leh Fluegge, Millie McQuilin, Rebecca Mc Gowan, Kristen Rebello and Janet Leparteleg.

I have attended many events for women in computing but this one will be always unforgettable. Partly because of how the world had so very suddenly changed, but mostly in awe and respect for the resilience and tenacity of strong-minded women who were not going to let a pandemic get in the way of celebrating women in computing. A lesson for us all.

ACM-W womENcourage 2020 will also be online for the very first time, and I am confident that it will also be a great event. And maybe see a few of those faces I met in BCSLL. See you there too?