In the last days of 2020, ACM has recognized 64 computer scientists as Distinguished Members for their outstanding contributions to the field.  Prof. Maribel Fernández, Professor of Computer Science, Department of Informatics at King’s College London UK, is the only female computer scientist from Europe recognised for this honour this year.

“The active participation of ACM members, in our organization, and in the field more broadly, is the foundation of a global scientific society,” wrote ACM President Gabriele Kotsis. “With the Distinguished Member designation, ACM celebrates specific contributions of these members and their career growth as reflected in a long-term commitment to the field, as well as their collaboration with peers in supporting a global professional association for the benefit of all.” Read the ACM news release. 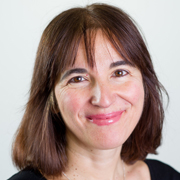 Professor Fernández is a Professor of Computer Science in the Department of Informatics at King’s College London, UK, where she has been Head of the Software Modelling and Applied Logic research group and Deputy Head of Department.

From a young age,  Professor Fernández liked solving mathematical problems and knew that she would study a mathematical subject. Computer Science seemed the best choice for her.  After studying Systems Engineering in Uruguay and Theoretical Computer Science in Argentina, she obtained her PhD in Paris in 1993, and her Habilitation in 2000 while she was a Maître de conférences at the École Normale Supérieure.

Professor Fernández is a great supporter of young researchers and a positive role model, especially but not exclusively, for women in computer science. She was a member of the ACM-W scholarship committee (2012-2018). She has written textbooks on programming languages and computation models to introduce these research areas to undergraduate and MSc students.  In 2016, she won the King’s Supervisory Excellence Award, designed to recognise and reward supervisors for the outstanding supervision and support that they offer to doctoral students at King’s College London.

I consider PhD students as future colleagues, and try to involve them in all the aspects of research.

Heartfelt congratulations to Prof. Fernandez on this brilliant achievement.