Check out the details about this year’s womENcourage™ celebration (2023) here. 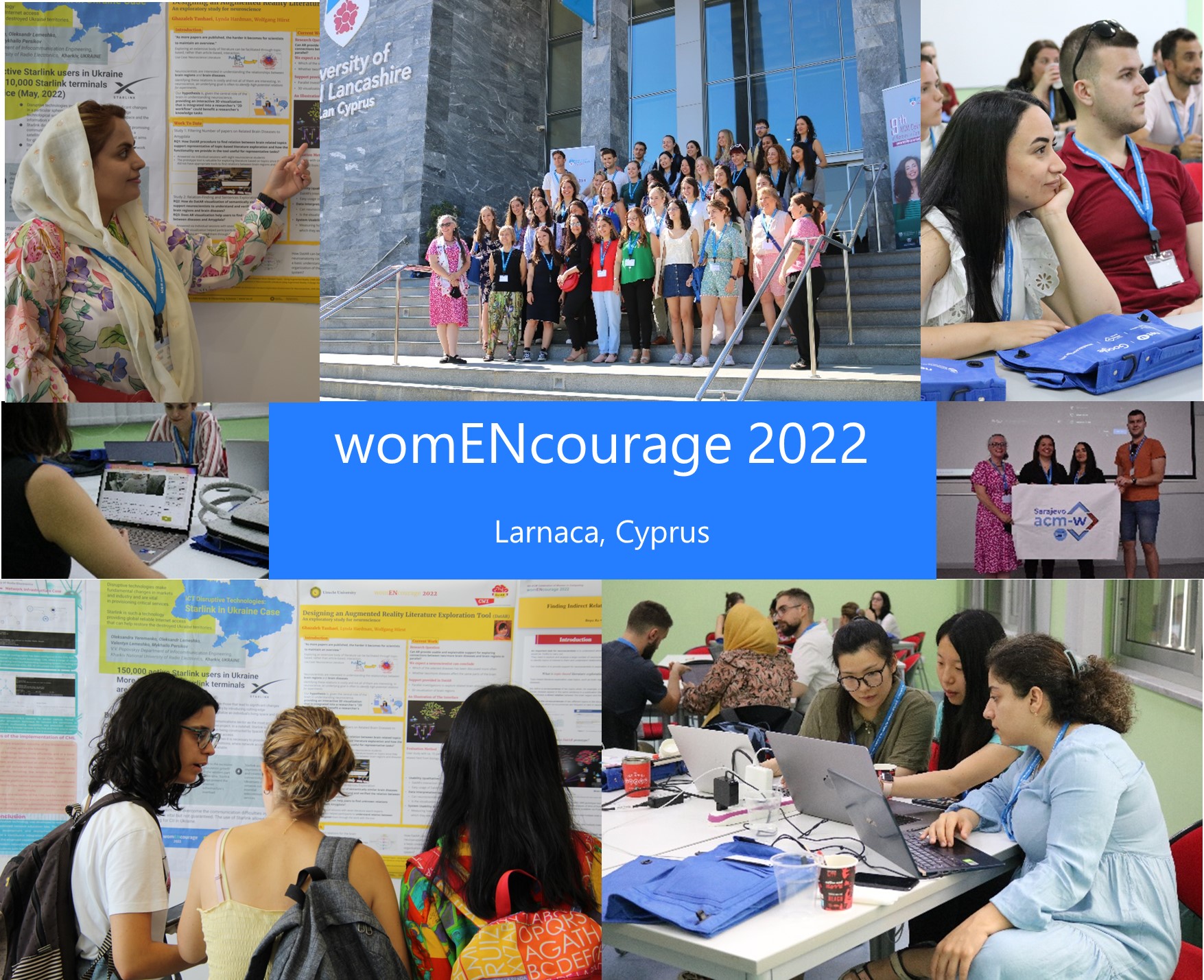 The 8th ACM Celebration of Women in Computing: womENcourage™ 2021 took place in Larnaca, Cyprus. Aiming to encourage everyone, regardless of gender, to get involved in the exciting world of digital technology and to break down stereotypes about the role of women in the field of information technology, the University of Central Lancashire (UCLan) Cyprus in collaboration with the Cyprus University of Technology, under the auspices of ACM-W Cyprus and the Cyprus Deputy Ministry of Research, Innovation and Digital Policy, co-organised the 3-day event.

The celebration event took place between 21-23 September at the premises of UCLan Cyprus in Larnaka Cyprus, and included keynote talks, panel discussions, workshops, poster exhibitions, a Hackathon and other events. The event was attended by internationally recognised speakers, judges and mentors and the attendees were welcomed by the president of ACM, the president of ACM-W and the president of ACM-W Europe, in addition to the local chairs, organisers and supporters of womENcourage™ 2022.

After two years of hosting the event online due to the ongoing challenges worldwide, this year we could meet in person again. 84 people attended from 22 countries, both males and females, making the event a success. 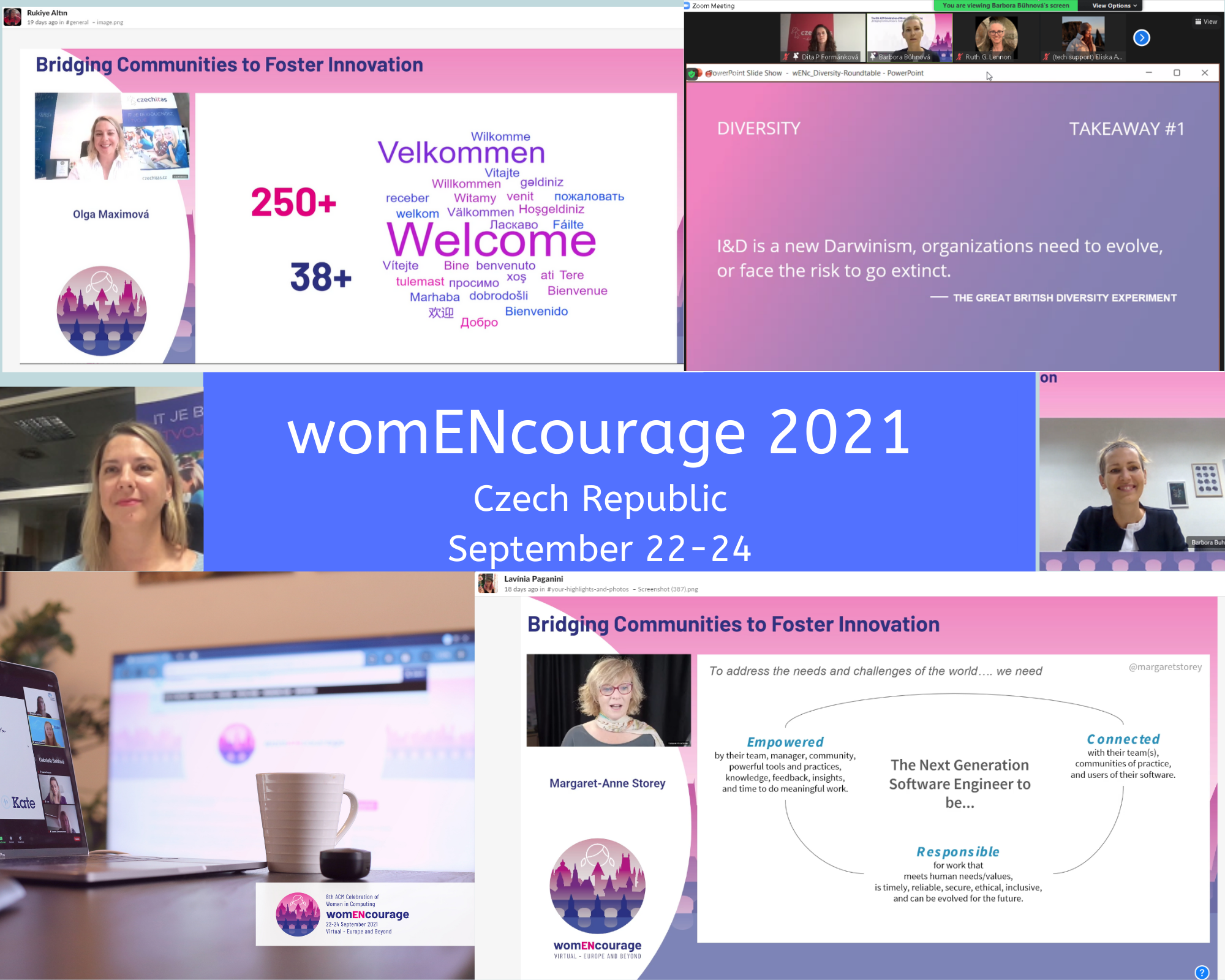 The 8th ACM Celebration of Women in Computing: womENcourage™ 2021 was virtual (coordinated from Prague, Czech Republic), and took place 22-24 September, 2021. The conference general chairs were Barbora Bühnová, Masaryk University, Czech Republic and Olga Maximová, Czechitas, Czech Republic.  We have featured Barbora Bühnová as one of our diversity heroes at out blog, do not miss reading it!

The womENcourage™ 2021, which took place between 22-24 September 2021, was a brilliant success. The slogan of the event this year is “Bridging Communities to Foster Innovation”. There were three days of inspirational speakers, thought-provoking discussions, exchanging best practices, and practical tips for building bridges between businesses,  academia, not-for-profit and public institutions, inviting them to co-create together.

260 people from different walks of life, from more than 38 countries, and each continent except Antarctica attended womENcourage™ 2021. Powerful and inspiring voices of our speakers, therefore, carried through all timezones of our planet. 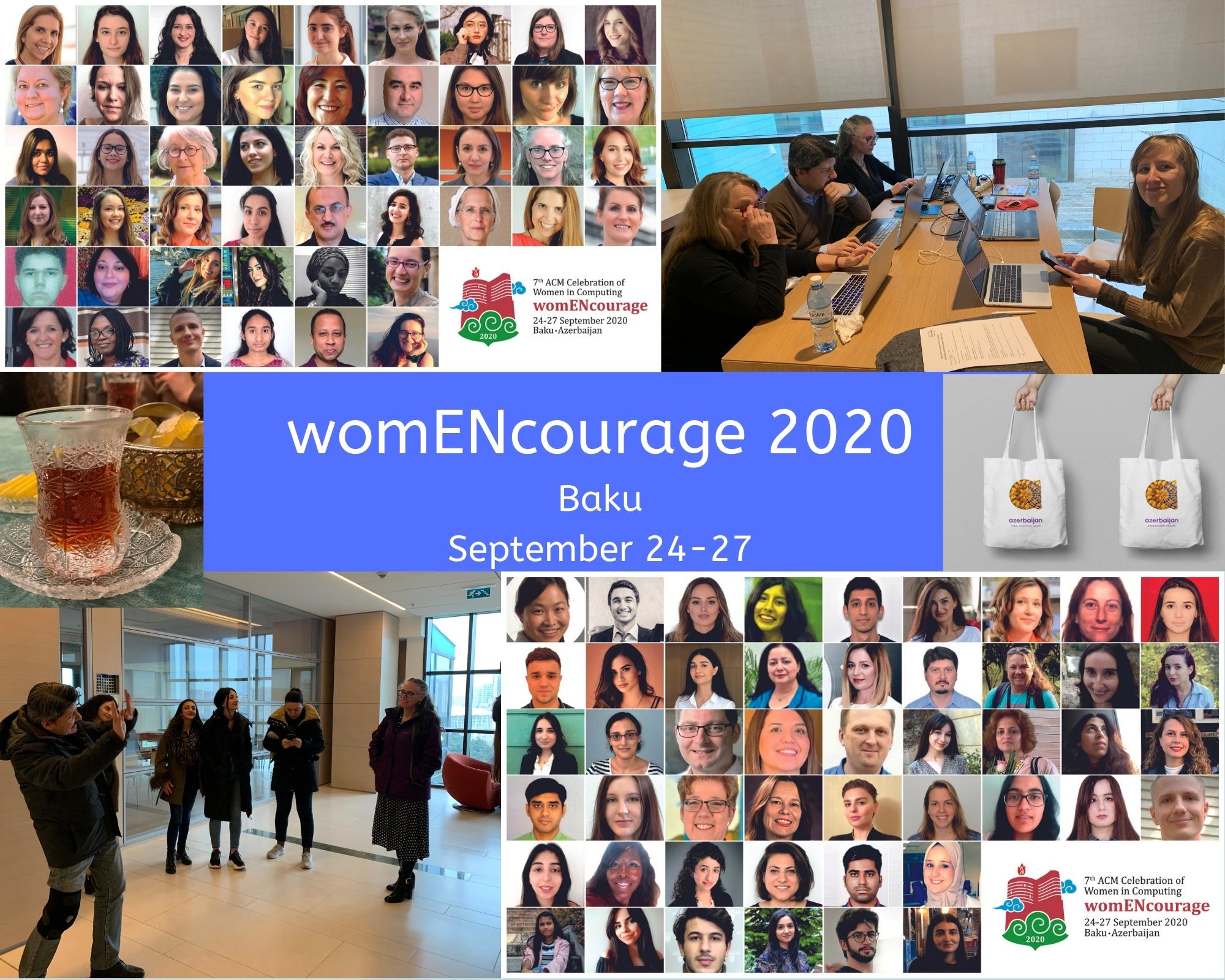 Due to the global pandemic, the event was run  as an online virtual event to ensure health and welfare of the attendees. The slogan of the event this year is “The equation has two sides”, which reflects our desire to celebrate diversity and balance in our profession. Inclusiveness, involvement of all parties is crucial for resolving any diversity issue.

“Moving from in person to virtual conferences is hard. How do you engage people with the program? Have a dedicated team constantly texting in chat windows? have a live ‘networking session’ that runs 12 hours a day? I think the most important thing is to have an engaging program and amicable people willing to meet. Keynotes, company representatives, organisers and all attendees willing to contribute to the discussion. These past 4 days were a great success. It is not often that I get to say how much fun I had working with an organising committee.  I have to thank Araz Yusubov, Bev Bachmayer, Rukiye Altin, Adriana Wilde and Nuria Castell. ACM-W Europe Thank you ADA University for hosting womENcourage 2020. “

You can find selected talks at womENcourage 2020 on this Youtube playlist. 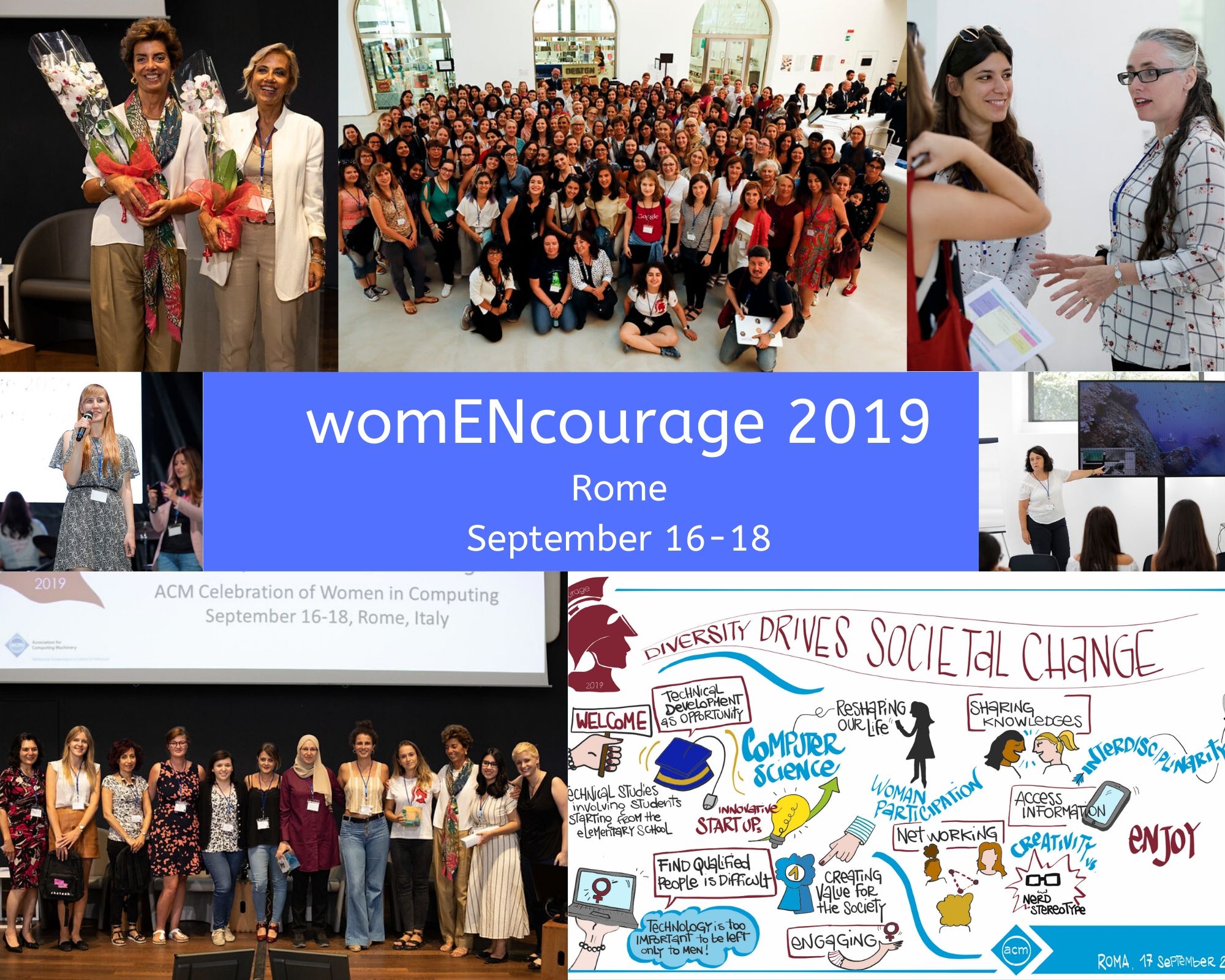 The three-day event hosted a hackathon, workshops, posters, technical talks, panel discussions and, for the first time in the history of the celebration, interdisciplinary research tracks.

The event was attended by over 350 participants, of which 55% were students, of those we had 62% graduate and 38% undergraduate students. womENcourage had a strong showing of male attendees who made up 15% of the total attendees. The participants came from 32 countries covering four continents (Europe, Asia, Africa, and America).

Read more about the event on our blog, where several of the participants wrote about their womENcourage experience in blog posts in the series ‘My Journey in Technology’. 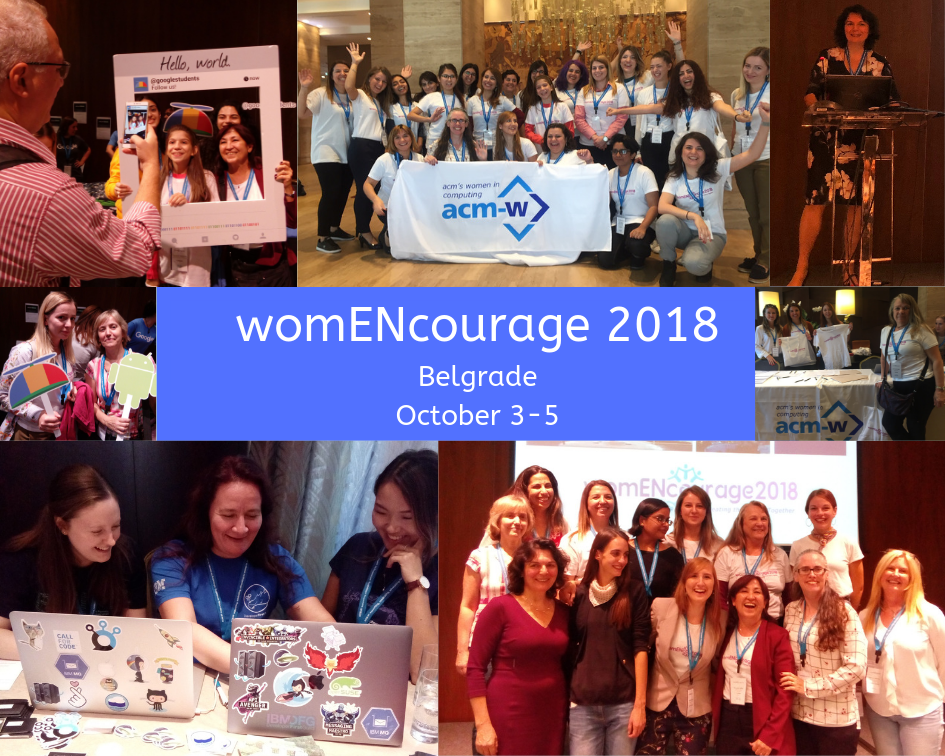 The 5th ACM Europe Celebration of Women took place in Belgrade, Serbia and it was all about “Creating the Future Together”. The celebration was organized by the leads of the local ACM-W Europe Chapter, Bojana Milasinovic, and Sandra Tomic.

The opening talk was by Kathleen Richardson: A dystopia in the making? – the rise and rise of ethics of robotics and AI. Prof. Tiziana Catarci, from the University of Rome “La Sapienza” moderated a panel on Human-Computer Interaction (HCI) and societal challenges of “Building Computing Systems and Services for the Society”. Panellists Olja Rastic Dulborough, Adriana Wilde, and Dorota Filipczuk provided their view on the societal transformations due to the prolific adoption of digital technologies.

Participants were inspired by creative themes for the Hackathon project. On the third day of the conferences they engaged in a variety of Workshops that were selected to promote three important aspects: awareness of opportunities to expand knowledge and experience, the expansion of skills, from core professional competencies to leadership styles, and motivation to act and take initiatives towards their personal and professional goals.

Attendees commented womENcourage was “brilliant experience, fun and inspiring” and “need more of these activities to encourage women in [our respective countries] to take more initiative in engineering, IT and other technical areas of expertise”. 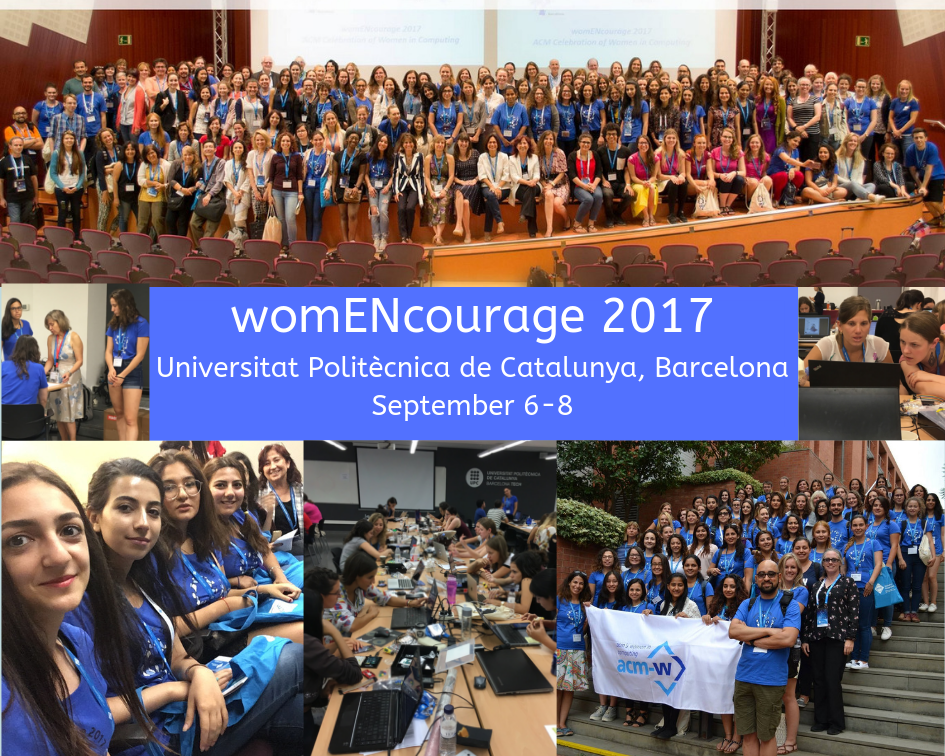 The 4th ACM Europe Celebration of Women in Computing in Barcelona was one of four co-located events at the ACM Europe Conference, at the Universitat Politècnica de Catalunya (UPC), in Barcelona womENcourage had 206 attendees from 31 countries, 72 scholarships to attend the event, 74 posters, and 17 supporters that helped make it all possible.

Participants enjoyed workshops in coding, programming and other topics; a career fair; a hackathon, where teams were given Intel’s Arduino board and IoT dev tool; and many opportunities to network.

All participants reported the infectious enthusiasm in the conference, and the importance of Celebrations in supporting our undergraduate and graduate students. Read a report in the September issue of ACM-W Connections newsletter. View photos from the womENcourage hackathon. 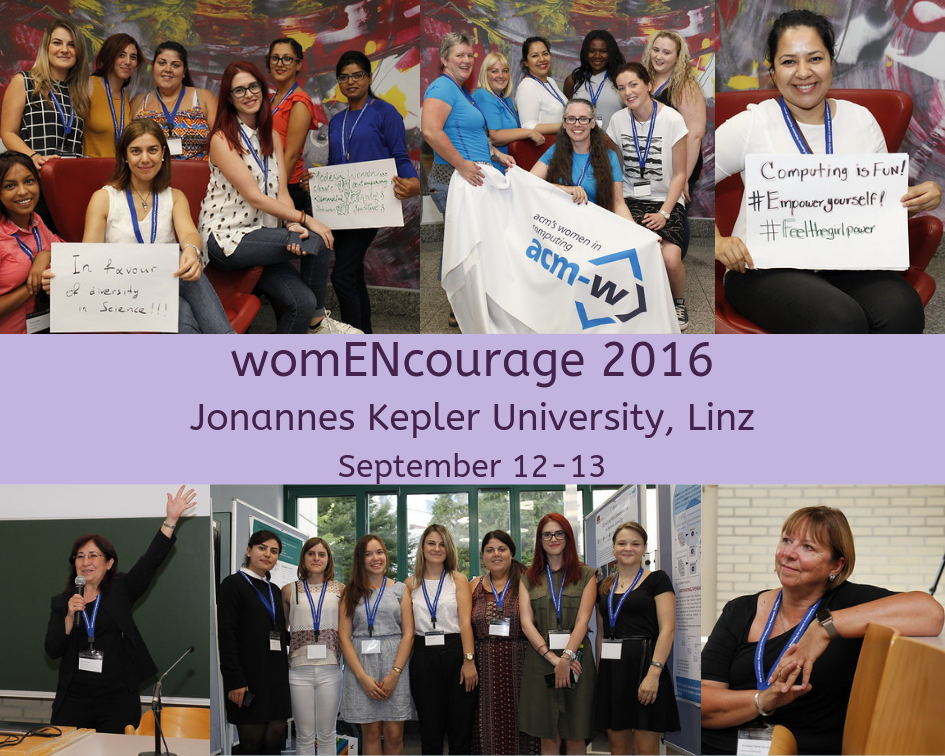 As the 3rd ACM-W Europe Celebration of Women in Computing kicked off in Linz, Austria, at Johannes Kepler University. The theme of the event: Crossing Borders, and was organised by Gabriele Anderst-Kotsis and Reyyan Ayfer. The opening key talk was given by Lynda Hardman: “From Linked Data to Stories”.

Justifying the theme of the celebration, tt was evident that we were in the presence of many different cultures and people from many countries. The diversity was obvious when looking at the geographic origins of attendees, who came from four out of five continents, from as far west as Colorado in the US, to as far south as South Africa and as far east as Russia. The program underscored the diversity of the event: from programming in Android, to computational music, perception, programming languages, entrepreneurship, wrapping up with a lively panel discussion: “Promoters and Prohibitors for a Career in CS” chaired by Dame Wendy Hall. The panel elaborated on career perspectives for young researchers. With this event we crossed more than just geographical borders, we also shared our technology, cultural and networking interests. 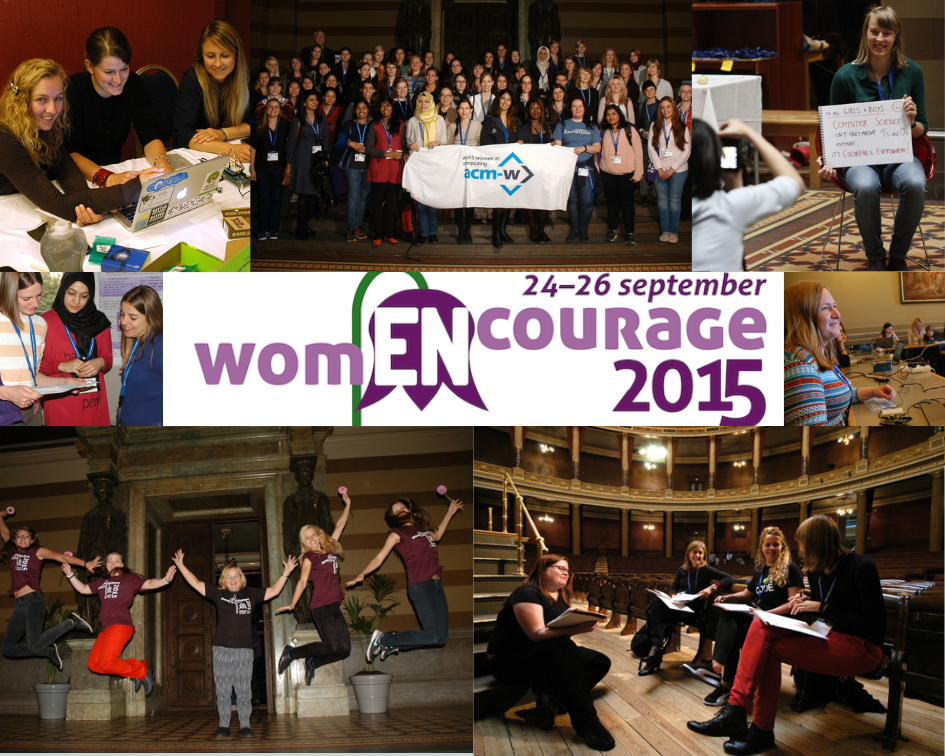 Conference chairs were María Andreína Francisco and Virginia Grande from Uppsala University, Sweden. The opening keynote was by Prof. Vicki Hanson, “Computing for Humans”, and the event closed with a keynote from Prof. Marie-Paule Cani, who talked about “Towards Expressive 3D Modeling: An example of a career in Computer Graphics”.

The co-organiser of the celebration, Virginia Grande commented in an article (Swedish): “I feel that Womencourage makes a difference, students who participated in last year’s conference say that they continued their master’s studies thanks to us, it feels great!”

See the photos taken by our photographers, Kristina Lidayova and Tomas Oravec, and view the recorded sessions. 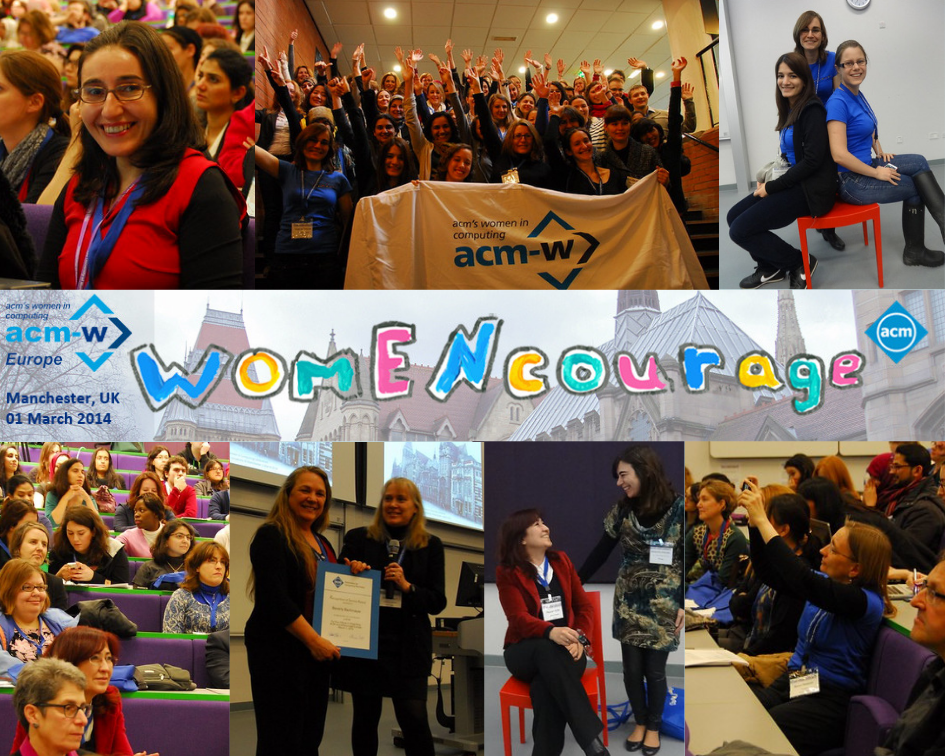 “I wanted to change the world… So I became a computer scientist.” declared a PhD student of computer science at Cambridge University during a discussion called “What can you do to change the world?” part of our first ACM-W Europe conference. Computer scientists from 28 countries convened in Manchester, UK – he home of the first stored computer and base for much of Alan Turing’s work – on Saturday, March 1st for the first womENcourage celebration of women in computing.

Videos of talks and photos are available at our Flickr page.

ACM-W Europe
ACM-W Europe 10-year #Anniversary - We continue to thank our members throughout the year and this month we are thanking Erika Abraham.

"I am deeply involved in the activities of the WIRE Working Group, as well as in a related European COST Action named Eugain (European Network For Gender Balance in Informatics). Being associated with ACM-WE allows me to build bridges between these activities and those of ACM-WE, such that we can exploit each others’ experiences and strengthen each others’ impact."

ACM-W Europe
We are excited to announce the ACM-W Europe 10th Anniversary Celebration to highlight the organization's activities on its mission to support, celebrate, and advocate for the full engagement of women in all aspects of the computing field in Europe and beyond.

Register now to receive the link to Zoom session: https://acm-w-europe-10.eventbrite.com

ACM-W Europe
The latest blog is from Jessica Oo who wrote about remote work and remote conferences, having attended womENcourage online in the past.
https://acmweurope.acm.org/the-pandemic-impact-on-remote-work-and-remote-conferences-by-jessica-oo/

ACM-W Europe
The deadline for nominating a fellow ACM-Women member for our Rising Star Awards is almost here! You can submit the nomination by November 30, 2022! The award recipient will receive a framed certificate and a $1,000 stipend. We encourage self-nominations. Please find more details about the award and how to apply on the website: https://women.acm.org/awards/rising-star-award/

ACM-W Europe
Do you want to organize the #womENcourage 2024? Don't miss out the deadline (10th of November) for expressing your interest!
Check out the details on our website: https://acmweurope.acm.org/celebrations/